Roland is an innovative professional with 35 years of progressive management and experience in the Smallgoods industry. He also feels extremely privileged to have been invited by the Royal Agricultural Society over the past 10 years to judge in the Smallgoods section of the Royal Easter Show.

Now with the help of his son Giovanni, Roland is incorporating his expertise and knowledge to manufacture the most delicious traditional tasting smallgoods. Using only the highest quality Australian pork and authentic fresh ingredients and applying true traditional methods.

Once you have a simple taste of Roland’s range of smallgoods, it will bring you back to the days where Roland Melosi’s smallgoods were second to none. Because we are proud of our family name we put pride and care into preparing a beautiful product that we hope you enjoy. 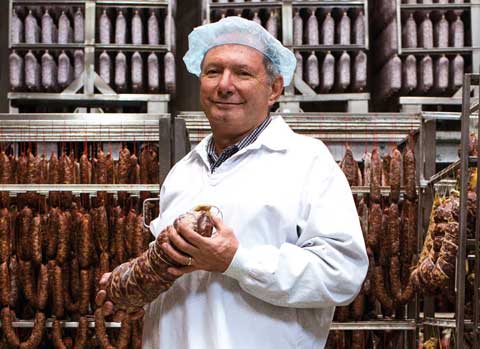 Roland Melosi has been curing meats since he was a young teenager apprenticing under his father and has always been a cured meat artisan.

GALLERY OF HISTORY AND PRESENT